We’re delighted to announce the launch of a new website for the Performing Lost Songs Project: https://boethius.mus.cam.ac.uk

The prospect of recovering the music of lost songs of the distant past is tantalising, even more so when traces survive in unfamiliar notations that cannot be fully reconstructed. Such is the case for arguably the earliest layer of a continuous tradition of European song, which survives in the form of notated Latin lyrics bridging late antiquity and the early middle ages. Our new website introduces one body of song within within this largely unknown repertory, songs from Boethius’ De consolatione philosophiae (On the Consolation of Philosophy). The resource provides access to source materials, explains techniques of reconstruction, offers versions created to date, and hopes to receive feedback on the methods employed.

We’re very pleased to announce that the ‘Performing Lost Songs’ project has been longlisted for the 2016 NCCPE Engage Awards for projects for demonstrating high levels of public engagement with research.

Many congratulations to all winners!

A new documentary of the ‘Peforming Lost Songs’ project, made by Martin Kendrick of ICA Films, is now available to view here:

We hope you enjoy it! 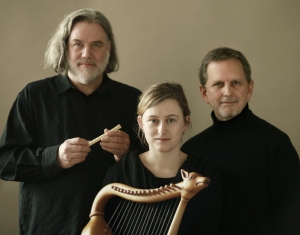 After a sell out performance in April, Sequentia will be returning to Cambridge on 2 July for a second performance of the newly reconstructed melodies of Boethius’ ‘Consolation of Philosophy’. Tickets are available here.

The public concert forms part of a scholarly conference: ‘Medieval Latin Song from c. 800 to c. 1200’ taking place at Pembroke College on 2 July. This one-day interdisciplinary conference is dedicated to Latin song not routinely performed in the liturgy from the Carolingian era through to the New Song repertories recorded from c. 1100 onwards. The opening address is given by Professor C. Stephen Jaeger and the concluding paper by Professor David Ganz. Invited papers will be given by scholars of medieval music based at the Universities of Cambridge and Würzburg, including Professor Susan Rankin and Drs Elaine Stratton Hild, David Catalunya and Konstantin Voigt. A full list of papers is available here and registration is available here.

An ancient song repertory will be heard for the first time in 1,000 years this week after being ‘reconstructed’ by a Cambridge researcher and a world-class performer of medieval music

There have been times while I’ve been working on this that I have thought I’m in the 11th century, when the music has been so close it was almost touchable.
Sam Barrett

‘Songs of Consolation’, to be performed at Pembroke College Chapel, Cambridge on April 23, is reconstructed from neumes (symbols representing musical notation in the Middle Ages) and draws heavily on an 11th century manuscript leaf that was stolen from Cambridge and presumed lost for 142 years.

Saturday’s performance features music set to the poetic portions of Roman philosopher Boethius’ magnum opus The Consolation of Philosophy. One of the most widely-read and important works of the Middle Ages, it was written during Boethius’ sixth century imprisonment, before his execution for treason. Such was its importance, it was translated by many major figures, including King Alfred the Great, Chaucer and Elizabeth I.

Hundreds of Latin songs were recorded in neumes from the 9th through to the 13th century. These included passages from the classics by Horace and Virgil, late antique authors such as Boethius, and medieval texts from laments to love songs.

However, the task of performing such ancient works today is not as simple as reading and playing the music in front of you. 1,000 years ago, music was written in a way that recorded melodic outlines, but not ‘notes’ as today’s musicians would recognise them; relying on aural traditions and the memory of musicians to keep them alive. Because these aural traditions died out in the 12th century, it has often been thought impossible to reconstruct ‘lost’ music from this era – precisely because the pitches are unknown.

Now, after more than two decades of painstaking work on identifying the techniques used to set particular verse forms, research undertaken by Cambridge University’s Dr Sam Barrett has enabled him to reconstruct melodies from the rediscovered leaf of the 11th century ‘Cambridge Songs’.

“This particular leaf – ‘accidentally’ removed from Cambridge University Library by a German scholar in the 1840s – is a crucial piece of the jigsaw as far as recovering the songs is concerned,” said Dr Barrett.

Part detective, part musical time traveller, Barrett’s scholarly groundwork has involved gathering together surviving notations from the Cambridge Songs and other manuscripts around the world and then applying them to the principles of musical setting during this era.

“After rediscovering the leaf from the Cambridge Songs, what remained was the final leap into sound,” he said. “Neumes indicate melodic direction and details of vocal delivery without specifying every pitch and this poses a major problem.

“The traces of lost song repertoires survive, but not the aural memory that once supported them. We know the contours of the melodies and many details about how they were sung, but not the precise pitches that made up the tunes.”

After piecing together an estimated 80-90 per cent of what can be known about the melodies for The Consolation of Philosophy, Barrett enlisted the help of Benjamin Bagby of Sequentia – a three-piece group of experienced performers who have built up their own working memory of medieval song.

Bagby, co-founder of Sequentia, is also a director of the Lost Songs Project which is already credited with bringing back to life repertoires from Beowulf through to the Carmina Burana.

Over the last two years, Bagby and Barrett have experimented by testing scholarly theories against the practical requirements of hand and voice, exploring the possibilities offered by accompaniment on period instruments. Working step-by-step, and joined recently by another member of Sequentia, the harpist-singer Hanna Marti, songs from The Consolation of Philosophy have now been brought back to life.

Added Barrett: “Ben tries out various possibilities and I react to them – and vice versa. When I see him working through the options that an 11th century person had, it’s genuinely sensational; at times you just think ‘that’s it!’ He brings the human side to the intellectual puzzle I was trying to solve during years of continual frustration.”

While it’s unclear whether Boethius ever wrote Consolation’s poetry to be sung, the Roman philosopher recorded and collected ideas about music in other hugely influential works. During the Middle Ages, until the end of the 12th century, it was common for great works such as Boethius’ to be set to music as a way of learning and ritualising the texts.

There have been other attempted settings of The Consolation of Philosophy across the centuries; especially during the renaissance and the 19th century when melodies were invented to sound like popular songs of the day.

But it was the rediscovered leaf of the Cambridge Songs that allowed the crucial breakthrough in being able to finally reassemble the work as it would have been heard around 1,000 years ago.

Originating in the Rhineland in the first half of the 11th century, the Cambridge Songs makes up the final part of an anthology of Latin texts that was held in Canterbury before making its way to Cambridge University Library by the late 17th century.

In 1840, a Germanic scholar cut out an important leaf and returned home. For 142 years, Cambridge presumed it lost before a chance discovery by historian and Liverpool University academic Margaret Gibson in 1982.

During an unscheduled visit to a Frankfurt library, Gibson enquired as to whether they had any Boethius manuscripts and was told of a single leaf in their collections. Gibson immediately recognised the leaf as coming from a copy of Consolation and its likely importance for the number of neumes it contained.

Gibson then got in touch with Cambridge University medievalist Christopher Page, then a PhD candidate, who realised this was the missing leaf from the Cambridge Songs and secured its return to the city nearly a century and a half after its disappearance.

“Without this extraordinary piece of luck, it would have been much, much harder to reconstruct the songs,” added Barrett. “The notations on this single leaf allow us to achieve a critical mass that may not have been possible without it.

“There have been times while I’ve been working on this that I have thought I’m in the 11th century, when the music has been so close it was almost touchable. And it’s those moments that make the last 20 years of work so worthwhile.”